A benchmark provides a measure of accuracy per computational cost. By "accuracy" we associate either the relative or absolute error of the Hamiltonian:
\(\displaystyle{\qquad {\varepsilon _{rel}} = \frac{{\left| {H\left( t \right) - {H_0}} \right|}}{{|H_0|}} }\) \(\displaystyle{\qquad {\varepsilon _{abs}} = \left| {H\left( t \right) - {H_0}} \right|}\)
where H0 is the initial Hamiltonian and H(t) is the Hamiltonian at a later time. A definite error can be assigned by either considering the maximum error or the average error over a time span long enough to properly represent the evolution of the system:
\(\displaystyle{\qquad {\varepsilon _{rel,max}} = \mathop {\max }\limits_{0 < t < {t_{end}}} \left( {\frac{{\left| {H\left( t \right) - {H_0}} \right|}}{{|H_0|}}} \right) }\) \(\displaystyle{\qquad {\varepsilon _{rel,avg}} = \frac{1}{N}\sum\limits_{t = 0}^{{t_{end}}} {\left( {\frac{{\left| {H\left( t \right) - {H_0}} \right|}}{{|H_0|}}} \right)} }\)
where N is the number of iterations and H0 is assumed not to be 0. A definite absolute error can likewise be expressed. By "computational cost" we associate the total number of gradient evaluations required to provide one time evolution of the canonical coordinates. To compare the performance of integrators with different computational costs, it is neccessary to account for the different number of gradient evaluations. We introduce the term "time per evaluation" which is a measure of the time progressed per computational cost or more precisely the time per pair of T and V gradient evaluations. A complete analysis involve one of these error estimates evaluated for any time step τ Example: Consider a benchmark of the symplectic Euler method (c1=d1=1) and the rational third order integrator by Ruth 1983 (c1=1, c2=-2/3, c3=2/3, d1=-1/24, d2=3/4, d3=7/24).
Applying the same time per evaluation for both methods, say 0.1 would imply that:
- The Euler method is iterated with τ = 0.1
- The third order method is iterated with τ = 0.3

We desire to test the performance of fifth order integrators published in "Tselios, Kostas and Simos, T. E.. Optimized fifth order symplectic integrators for orbital problems. Rev. mex. astron. astrofis. 2013, vol.49, n.1, pp.11-24. ISSN 0185-1101" and furthermore compare them with the acclaimed fourth order method "Ruth 1989" and sixth order method "Yosh s7o6 A". All fifth order methods are found in "integrators s7o5.zym". The best-performing "Method 2" is also found within the default integrator file "integrators.zym" under the name "Tselios5". The benchmarks are performed using the systems under default initial conditions distributed with Zymplectic: In each case, a graph has been generated from the benchmark data files using the MATLAB/octave file "benchmark.m".

The following graph displays the average relative error of the Hamiltonian εrel,avg as a function of time per gradient pair evaluation. The graph is displayed in a log-log diagram depicting the integrator order as the slope of the lines. Note the distinctive slopes of the star- and triangle-marked lines in relation to the 4th and the 6th order integrators. It is noteworthy that the well-acclaimed 4th order method "Ruth 1989 [Tf]" is only competitive for large time steps whereas the well-acclaimed 6th order method "Yoshs7o6 A [Tf]" only performs better than the second fifth order method in the domain where the error approaches the limit of double-precision arithmetic. The naming conventations [T] refers to integrators where the gradient of T is evaluated first, whereas f in [Tf] refers to integrators with "first same as last" or "FSAL". FSAL implies that the last d-coefficient is zero and the computational cost of the integrator is reduced, which is also accounted for in the "time per evaluation" definition. As visual context one may consider a cross section (see above graph) which depict a full simulation of each integrator at a given time step. The error of these simulations are graphically displayed in Zymplectic during runtime. The following figure displays error as a function of simulation time for each of the three methods with smallest maximum Hamiltonian deviation. 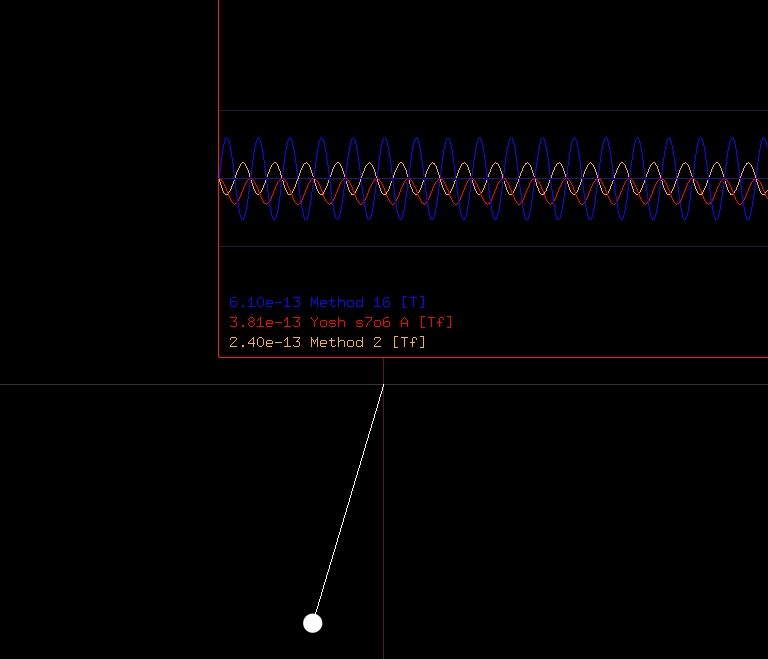 The following graph displays the average relative error of the Hamiltonian εrel,avg as a function of time per gradient pair evaluation. It is worth noting the performance of the integrators vary from the previous results with the simple pendulum. Additionally the integrators while identical in implementation differ greatly in performance as the error at a given time step evidently varies by several order of magnitudes.

The generalized Kapitza pendulum is non-autonomous as the Hamiltonian explicitly depends on time, meaning that a constant H0 is not useful. Instead we introduce a comparative algorithm, where H0 is associated with the Hamiltonian in a simulation with smaller time step. Each point in the graph is then a full simulation with regular time step followed by a full simulation with smaller time steps assumed to yield the "correct" Hamiltonian H0. The maximum and average error can then be obtained by subtraction. The following graph shows the average absolute error as a function of time per gradient per evaluation.

Other than having to account for the computational cost of each method, there's no standard method for benchmarking integrators. Whether one should consider the maximum Hamiltonian deviation, the average deviation or possibly the squared average deviation remains as a subjective choice. It should be noted that all benchmark methods provide approximately the same results.